Ep191 Being salesy, with Andrew Barrett 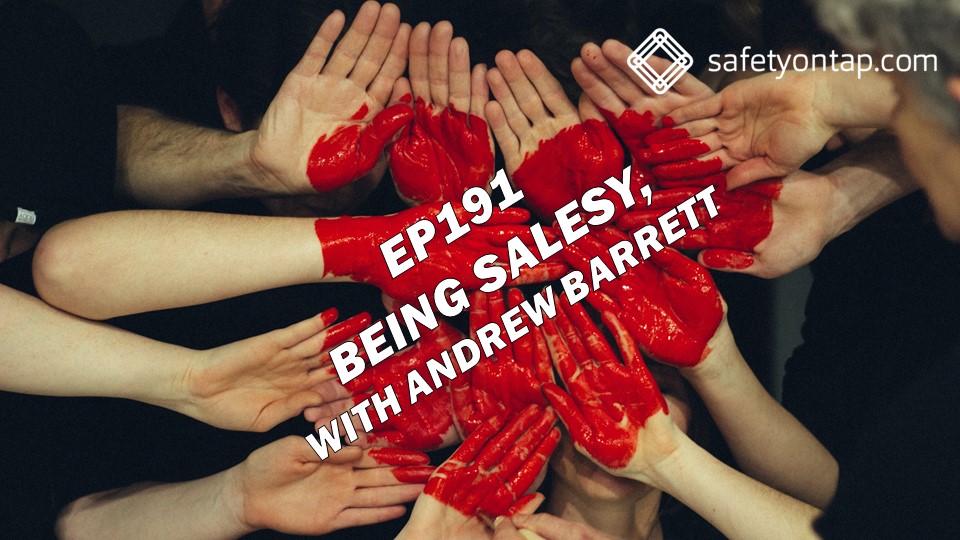 Let’s talk about Linkedin, humanity, and being salesy.

Since you’re listening in, you must be a leader wanting to grow yourself and drastically improve health and safety along the way.  Welcome to you, you’re in the right place.  If this is your first time listening in, thanks for joining us, and well done for trying something different to improve! And of course, welcome back to all of you wonderful regular listeners.

I am connected with tens of thousands of people, in some direct way.  Whether that’s someone who has seen me speak, been in a workshop, listened to my podcast, or connected on social media.

Think about how many people you are connected to – your boss, your team, the leaders you deal with, the workers you have conversations with.  I bet that it’s hundreds if not thousands of connections.

This idea of connection is fundamentally human – it is what defines family, community, nations, and organisations.

So important is this idea, that there is a word for it in Nguni languages, spoken by millions of people in Southern Africa.

The word is ubuntu.

This is how Wikipedia explains it:

“Ubuntu (Zulu pronunciation: [ùɓúntʼù])[1] is a Nguni Bantu term meaning “humanity”. It is sometimes translated as “I am because we are” (also “I am because you are”),[2] or “humanity towards others” (in Zulu, umuntu ngumuntu ngabantu). In Xhosa, the latter term is used, but is often meant in a more philosophical sense to mean “the belief in a universal bond of sharing that connects all humanity”.[3]“

I believe in the universal bond of sharing that connects all humanity.

And I’m sure, to some extent, you do too.  And you also know how it gets corrupted and lost right in front of our eyes.

Social media was designed to help connect us, almost an enabler of ubuntu philosophy.

We have friends, on FB, and we have connections on Linkedin.

But we know that those friends and those connections aren’t really in the spirit of ubuntu, of a true human bond.  These are often distant, perfunctory, and sometimes even manipulative or manipulated.

I spend a bit of time on Linkedin because I love connecting with people and learning.  I am not a connection collector, I prefer a more organic and human way to use Linkedin.

For example, every single person I connect with on Linkedin gets a personal message from me.  It’s not automated, it’s not a bot, it’s my typing the message – Hi so-and-so, thanks for connecting.

Because I am genuinely thankful.

I am interested in both learning for my own development, in a kind of selfish way, which a diverse network of connections certainly helps.  And I’m interested in helping people.

And I reckon I would get a reply to maybe one or two percent of those hello messages.  And the proportion of messages which aren’t a simple thumbs up or clicking one of the suggested phrases Linkedin displays, that’s more like one-tenth of one percent of the messages I send.

And I have a few suspicions why that is.

First, we’ve been trained to collect friends and connections like a commodity, just get more.  This makes the connection process much less personal, it gets overwhelming when the sheer numbers are just so great.

Second, we’ve been trained to be suspicious.  It’s like how as kids we are taught don’t talk to strangers, stay away from strangers, strangers are bad.  It’s well-intended but mostly untrue.  The strangers on Linkedin aren’t scary horrible people we were warned about as children, they present a different kind of danger – that they’re going to try and sell you something.

We are all in Sales

Dan Pink wrote a book called ‘To Sell is Human’.  And he says no matter what job we are in, today, we are all in sales.  He talks about sales as the process of moving people from where they are, to engage with something new – whether it’s a product or service as we traditionally think about sales, or whether it’s a new idea, a project, a political campaign, a nurse getting a patient to take their medication, a parent getting their kids to do homework or safety professional getting people to implement a new control measure.

Are we what we dislike?

When I’m on Linkedin, I’m fighting an uphill battle to connect with people in a human way, I’m swimming upstream.  It’s slow, it’s inefficient, and I love it.

But when we get bombarded with unsolicited sales pitches, with irrelevant or untargeted marketing, we are getting used by the people at the other end, plain and simple.  And we become wary. That’s not how I operate but I suffer from the consequences of the bad behaviour of others who wouldn’t know ubuntu if it slapped them across the face.

When we try new initiatives, when we ask for feedback on our systems, when we expect managers to become leaders, we are selling them to someone else.

Are you ever in a hurry to get people to ‘buy’ or ‘buy-in’ to what you are selling? Are you ever impersonal in your communication, broadcast to many, vanilla in flavour, untargeted, and unsympathetic to the people we are trying to help?

Or do you operate ubuntu-style, recognising the inherent bond we share as humans and engaging with people accordingly?

We have a problem

Either way, we have a problem.  Either we’ve caused the problem, or we suffer because of how these people over lots of time and instances and messages, have learned to respond to anything with health and safety on the label.

You and me both.

We are all in sales.

And I know that you hate those unsolicited Linkedin sales pitches as much as your operational people hate some of the stuff health and safety churns out.  We can be in sales – with whatever it is we offer for others to engage in – without being salesy.

All that’s left for us, the only thing we really control, is ubuntu.

I am me, because of you. You are you, because of the people around you.  So let’s treat it like that.

And yes, please send me a human reply on Linkedin, this human will respond with empathy, patience, and curiosity.

Thanks so much for listening.  Until next time, what’s the one thing you’ll do to take positive, effective, or rewarding action, to grow yourself, and drastically improve health and safety along the way?

Before you go, keep listening for a few words about the work which makes this podcast free for you.  Seeya!

It’s not an investigation, it’s not a risk assessment, and it’s not a committee meeting – but a learning team approach can help to learn from the past, to anticipate the future, and to engage effectively with people all over your organisation or supply chain.