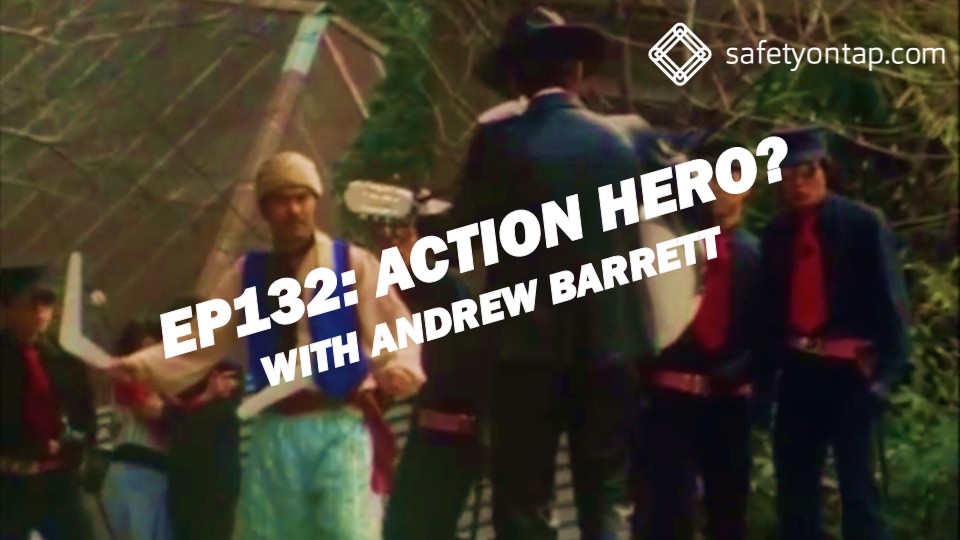 Until next time, what’s the one thing you’ll do to take positive, effective or rewarding action, to grow yourself, and drastically improve health and safety along the way? No, you haven’t accidentally skipped to the end of the episode. Today, I’m beginning with the end in mind. Let’s talk about action.

Since you’re listening in, you must be a leader wanting to grow yourself and drastically improve health and safety along the way. Welcome to you, you’re in the right place. If this is your first time listening in, thanks for joining us and well done for trying something different to improve! And of course, welcome back to all of you wonderful regular listeners.

Every episode of this podcast finishes with these same words: Until next time, what’s the one thing you’ll do to take positive, effective or rewarding action, to grow yourself, and drastically improve health and safety along the way?

What does that action look like? Because there is a good action, and there is not so good action.

“I know what you’re thinking punk. You’re thinking ‘did he fire six shots, or only 5’? Now to tell you the truth I’ve forgotten myself in all this excitement. But being that this is a .44 Magnum, the most powerful handgun in the world and will blow your head clean off, you’ve got to ask yourself a question: do I feel lucky? Well, do ya, PUNK?” – Clint Eastwood, in Dirty Harry

Clint Eastwood is arguably one of the most famous action hero’s from the movies. That line from Dirty Harry, in 1971, is one of the first examples of the cult of action heroes. Your list of memorable action heroes will depend on your age, where you live in the world, and your friend’s and family’s taste in movies.

Mine include the Terminator, Jason Bourne, and the timeless James Bond. My kids love the comic book heroes, like the Flash, Batman, and Captain America. And then there are maybe the less well known but locally famous. In Japan in the 1980’s I’m told one of the most famous heroes is Ken Hayakawa, from superhero series Kaiketsu Zubat.

That was Ken Hayakawa, a country & western looking gentleman carrying a mystical guitar which has a secret compartment in which he hides his superhero costume, who happens upon a couple being terrorized by an evil villain. In this episode, the bad guy is Boomerang Jack, dressed like Aladdin, whose choice of weapon is none other than the infamous hunting device of Australia’s indigenous people. Talk about a melting pot of styles and cultures there. And of course, if you were wondering, Hayakawa overcomes Boomerang Jack to save the day, ever the superhero.

We love action. We love the hero’s who get stuff done, who take on the baddies. We love action movies. And it’s not all too different in business.

We love do-ers. We love people who roll up their sleeves, and we turn our noses up at the people who act like seagulls – fly in, making noise and leaving excrement on everything, then flying away. Action, action, action!

I talk about growth and performance, as goals, as outcomes, being generated by two things. These two things cycle between each other, back and forth so there is never an obvious start or end. The two things are learning, and action. Learn, act. Act, learn. When you oscillate between the two, growth and performance spins out of the cycle, as if it is almost ejected with the centrifugal force created by your action-learning cycle.

Action without learning is a static state, and learning without action likewise is standing still. Performance, as distinct from less exciting things like survival, or stability, cannot be created without a cycle between action and learning, learning and action. In this day and age, standing still, not fine-tuning your performance, is a very dangerous thing to do.

Do you ever stop, and wonder why am I doing this? Why do we do it this way? Has anyone ever asked you those questions about safety? Do you struggle to find a good answer, beyond ‘because you we have to’? You might find yourself a little too action-heavy, and lite on learning. Anytime someone asks you, why do you do that, is a big fat clue that there is learning to be had. The question is whether you take up that learning opportunity.

The previous guest Dr. Jason Fox takes issue with action-obsession in business. In his writing and his podcast called The Cleverness, he often talks about slowing down to stay with the problem longer, to think a little more deeply, and pause the rush to action.

When I am coaching, I use a plain-English version of the GROW model of coaching many of you will be familiar with. It starts with BETTER, or the goal you seek. I think it’s emotionally easier to engage with BETTER than GOAL. You need to spend time working where you want to go. Then is NOW, or current reality. This is the starting line at that moment, with all its context. The first rule of navigation is you need to know where you are before you can go anywhere. And finally, I talk about HOW – the combination of Options and Will, in the GROW model. I say HOW because it is naturally a question word, how? which makes your brain work better than ‘what are your options, and let’s evaluate and build your desire to get there. HOW encourages you, it makes you curious, it almost taunts you to improve. If I were to measure the time spent in coaching, on BETTER, NOW, and HOW, I spend the same if not more time in BETTER and NOW, compared to HOW. How is action, but the action isn’t that useful if you haven’t nailed your BETTER and NOW.

Taking that one step further, or maybe one step too far, Italian writer, philosopher, and semiotician Umberto Eco, who grew up during Mussolini’s fascist regime in Italy, responded to the challenges of using the word fascist too loosely, as if Mussolini’s fascist was very similar to Hitler’s and the same as when we call the police fascist pigs because they give us speeding tickets. Despite this loose use of language, he reflected on the principles of what he called Eternal Fascism, saying this about action: “Irrationalism also depends on the cult of action for action’s sake. Action being beautiful in itself, it must be taken before, or without, reflection. Thinking is a form of emasculation”. Action without thinking, the pressure or obsession with action, in his mind, is a core feature of fascism. I’m sure I will get emails about that suggestion.


We’re almost at the end of the podcast. I’m about to bid you adieu as usual, with a call to action. But don’t forget the start, either. You are a leader, who wants to grow yourself and drastically improve health and safety along the way. Your growth and in turn performance needs action, but maybe not an action hero. To be effective, your action must oscillate with learning.

Steven Covey talks about two creations of anything that was ever created in the world by humans. The first creation is in our heads, our dreams or thoughts or intentions. But the world only changes when we enable the second creation, in reality, in the outside world. That is action. But it won’t be the most effective without learning.

Do I want you to take action? Absolutely. But maybe it’s not always the obvious action-hero approach. Maybe it’s not the three takeaways I suggest you consider after an interview. Maybe it’s not copying the new initiative you’ve heard from a guest or from me. Maybe, your next action is to reflect a little longer on a particular idea. Maybe your next action is to slow down the rest of your action, stay with the problem a little longer, listen a little more, admit you and everyone else might not know what to do next.

Thanks so much for listening. I think you’ll figure out what to do next.