Ep183: Made Visible, with Andrew Barrett 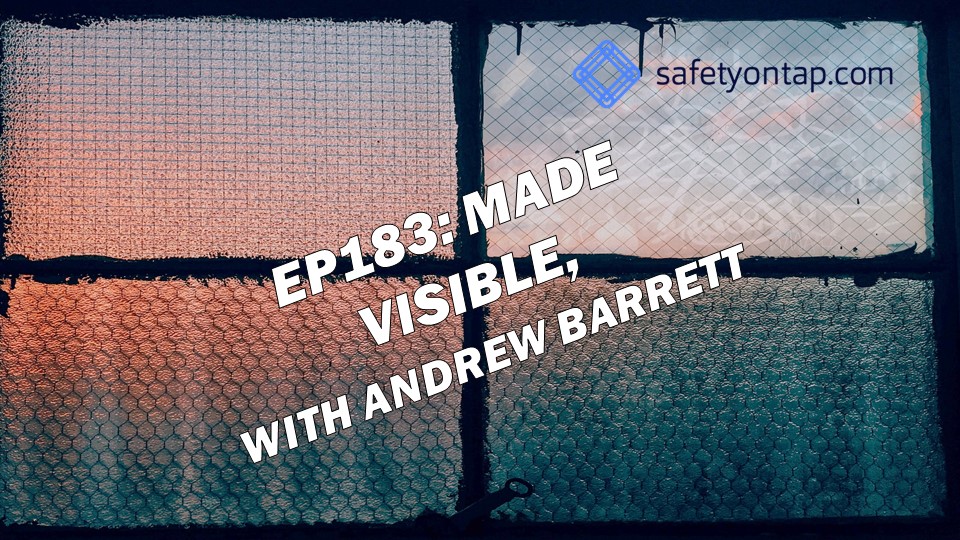 In our house, we are still working on hand washing after doing a number two.  My wife and I have the habit down pat, but the kids, not so much. This reflection begins, in a conversation with my four year old.

Since you’re listening in, you must be a leader wanting to grow yourself and drastically improve health and safety along the way.  Welcome to you, you’re in the right place.  If this is your first time listening in, thanks for joining us and well done for trying something different to improve! And of course welcome back to all of you wonderful regular listeners.

“Get your hands out of your pants”, I say to Jude as I’m eating my lunch.  Pleasant, I know right?!

“They’re not in my pants, they’re in my pockets”, Jude says as he quickly shifts position.

“But they were in your pants, and that’s not cool, man.  Plus they’re probably dirty now so you’ll need to wash them”.

Dramatically removing his hands from his pockets, Jude raises them up in front of his face, inspecting them.

“See, clean” was his verdict.

“Ok.  Have you gone to the toilet today?”

“Right, did you wash your hands?”

“I did not” (yes, that’s actually what he said like he’s been watching politicians give press conferences too much lately!)

“Did you wipe your bottom?” I ventured next, cautiously.

Shaking my head, more because the progression of the conversation wasn’t going to plan, or because this is certainly not the first conversation like this, I’m not sure.  Head shaking nonetheless, we talked about germs, like corona, and how we need to do things like washing our hands or wear a mask even though we can’t see the germs.

They are invisible to the naked eye, which makes it so much more important for us to keep them visible, in a figurative sense, in the way we behave, the decisions they make, and the habits we are endlessly trying to encourage in our kids.

Having empathy for others, and appreciating that they have a perspective and experience which is 100% valid for them, can be a difficult thing to comprehend, let alone practice.

I’ll give you an example.  I’m coaching a national health and safety team through the implementation of the second of their three-year strategy.  This point in time is all about enabling, creating new and improved capabilities in the organisation which means the development of the health and safety team is being invested in with the coaching, and we’ve embedded the Advanced Safety professional Practice program developed by previous guests and friend of the show Dave Provan at the start of our year-long work together.

Early in Dave’s program, we learn about the historical flavours of safety philosophy and theory which have changed over many many years, more than a century in fact.  The three big phases, which I am summarising them into, are:

– compliance and control (with roots in scientific management, and behavioural safety),

– safety culture (grappling with the tension between individuals and organisations, interested in things like accident proneness, culture, and climate),

The point of the exercise is to learn about historical theories, some of which will be new, to reflect on how they influence certain behaviours, organisational management, and even government policy, and the finally consider what works in what way, and what should we consider changing in our own practice.

I myself have had to reconsider my perspectives and practice around concepts of compliance, having realised that I had swung too far away from these theories which in many ways can be useful, appropriate, and productive.  I’ll share more about that in a future episode.

In episode 161 I talk about Maslow’s hammer (if all we have is a hammer, everything looks like a nail, right, you’ve heard that before?).  This ideas of making things visible extend that same idea, that we cannot possibly hope to improve if we aren’t open to seeing things that we didn’t see before.

I just finished a book called Batavia, about a 1600’s Dutch convoy in which the largest ship was shipwrecked off the coast of Australia.  In an outrageous story of adversity, of mutiny, of power-crazy leadership which turns into bloody murder, I was reflecting on the motivations and behaviour of these people, who set out to spend the best part of a year on a disease-ridden ship to go to a horrible disease-ridden new trading colony in present-day Jakarta.

The image of the voyager has come up a number of times recently with my coaching clients, safety people like you.  The opening is usually a signal from my coachee about closed-mindedness, about the stubbornness of perspective, where there is the possibility of exploring what’s not yet visible, and the courage it takes to do that.

Barely 100 years before the voyage of the doomed ship Batavia from Holland to Jakarta, the earth was assumed to be flat by plenty of people.  It’s not like there wasn’t a lot of evidence to support globe-shaped earth, but no one had proven it by sailing all the way around the globe, which Magellan did between 1519 and 1522.

So let’s think: in the year 1500 if you had a son or daughter who came to you with a grand plan: I’m getting on a ship and sailing halfway around the globe to explore new lands, would you be inclined to encourage them? Forget the destination and the cost and the potential for disease, if you thought the earth was flat then it is pretty inconceivable that anyone in their right mind would support their child to make such a voyage.

In fact, it’s reasonable to entertain that in fear of your child’s life at such a perilous idea, you might even harm or kill someone lest they take your child off the edge of the earth.  And at the same time, think about what kinds of learning and advancements came because, some people, only a few at first, were brave enough to make visible, in real life, what up until that point in history was merely a theory.

Which brings us to our conundrum, and the invitation for all of us.

The conundrum is that we might do really well for a really long time only worried about the things we can see, that we believe.

But if we are really invested in learning as we should be, as humans and as professionals, the invitation is to consider that there are things that exist: ideas, perspectives, facts, opinions, data, theories, or practices, which are not visible to us right now.  Not only do we need to entertain that possibility, the invitation to all of us as learners is to explore that with curiosity, with empathy for others, but most importantly with the courage and humility to change our beliefs, our theories, or our behaviour in response to what is now visible.

Whether it’s a four-year-old learning about germs, the parent of an adventurous child from the middle ages, or a health and safety professional, it’s hard to focus on things that we can’t see, that aren’t visible to us.  It doesn’t mean they aren’t there, it’s just that they aren’t visible to us.  And once it’s visible, the choice about what to do next, even if it’s do nothing, that’s on you.

Thanks so much for listening.  Until next time, what’s the one thing you’ll do to take positive, effective, or rewarding action, to grow yourself, and drastically improve health and safety along the way?

Before you go, keep listening for a few words about the work which makes this podcast free for you.  Seeya!

It’s not an investigation, it’s not a risk assessment, and it’s not a committee meeting – but a learning team approach can help to learn from the past, to anticipate the future, and to engage effectively with people all over your organisation or supply chain.