Ep179 What I learned after rejecting philosophy, with Andrew Barrett 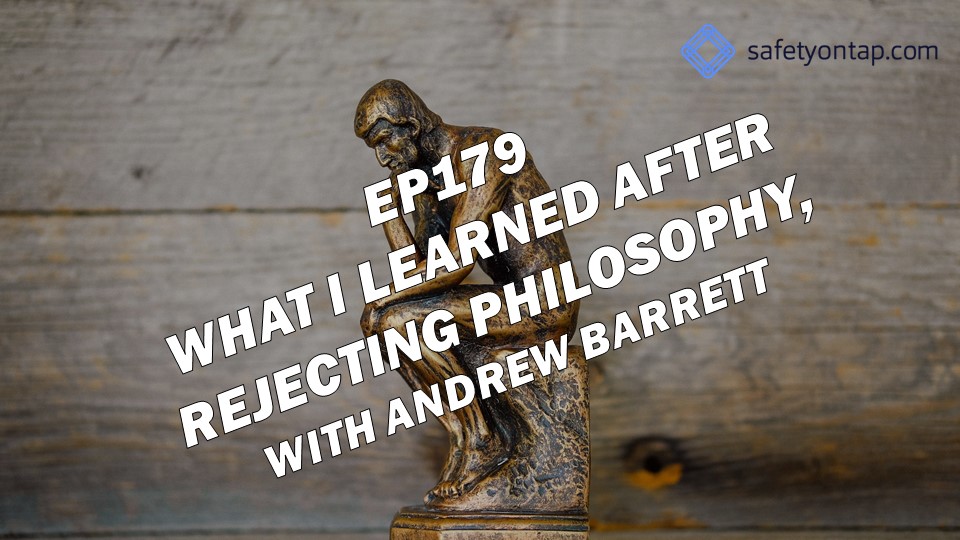 Does philosophy really have a place in work health and safety? Here’s what I discovered.

Since you’re listening in, you must be a leader wanting to grow yourself and drastically improve health and safety along the way.  Welcome to you, you’re in the right place.  If this is your first time listening in, thanks for joining us and well done for trying something different to improve! And of course welcome back to all of you wonderful regular listeners.

Here’s a word from our sponsor for this episode:

It’s not an investigation, its not a risk assessment, and its not a committee meeting – but a learning team approach can help to learn from the past, to anticipate the future, and to engage effectively with people all over your organisation or supply chain.

I’ve said and thought and done some things in my professional life that I now shake my head at.

Despite having multiple university degrees and undertaken a number of research projects, early on I had the view that ‘I am a practitioner, and so I don’t need to bother with research or evidence because that’s like the polar opposite of what I do, hands on professional work’.  Well I got that drastically wrong when I figured out how illiterate I was about what actually works to improve health and safety.  Lesson learned.

That practitioner worldview which I had adopted as my anti-academic badge of honour, also extended to philosophy which I felt was even more esoteric.  I’m not just talking about work here, as a human I thought of myself as a pretty grounded pragmatist.

Philosophy, which I thought of as the opposite of that, seemed so irrelevant.

On a side note, stereotypes are a great way for us to uncover some of our biases and implicit assumptions about the world.  So what kinds of stereotypes do you think I had about philosophy (and philosophers….?)

Let’s start with old.  Greek and Roman philosophers.  White robes.  All men.  Beards.  Arguing and not getting anywhere.  Confusing the people around them but feeling very smart in the process.  Words I didn’t understand and writing that was so old it mustn’t have much modern day relevance.

And I had a modern stereotype too.  Philosophy was in the arts – making an esoteric contribution society which nonetheless paled in significance compared to real science, economic and industrial spheres.

As for my modern philosopher stereotype? Tweed jackets.  Shades of brown.  Elbow patches.  Maybe a cravat. Beards, but more often goatees.  Either long hair of questionable cleanliness, OR short hair under a beret.  Smokers.  And almost always carrying a book around in their hand, usually leather-bound like it was an accessory no different to a wristwatch.

You get the picture? I hope this doesn’t cause offence, this is merely my stereotype of philosophy and philosophers.

So I spent a long time rejecting philosophy out of hand.

And it worked for me, until I came to realise how much I didn’t know was not working for me very well at all.

What really is real?

Modern safety works on the basis that we should prescribe certain parts of work.  Regulations impose requirements for specific things like cranes, or confined spaces, or dealing with chemicals.

We adopt risk management processes as a way of working out what parts of work should we prescribe, and how we should go about that.

Much of this is based on a philosophical perspective called positivism.  This is anchored in the idea that there is a single objective world that exists, and we can and should seek to discover and describe and influence that objective reality.

The everyday language which alludes to this viewpoint includes what we call facts, or laws of nature.

It’s this perspective that we use when we look at work at heights without adequate controls in place, and we say “no one is immune to gravity, let’s control this risk better”. The laws of physics are hard to challenge, who can argue with gravity?

Well people do all the time.  Likewise electricians arguing with conductivity (apparently many operate as if they are non-conductive).

It’s an insight into another philosophical perspective called interpretivism.  This supposes that individual people experience reality through their own unique lens, subjective instead of objective.  In fact this suggests that not only are we experiencing different realities but in the process we are creating a unique reality, some of which is shared and some of which is known only to each of us.

If our approaches to safety assume a single objective reality, how will they be effective if that assumption isn’t always true?

What is safety? What is risk? What is adequate, timely, complete, useful, productive?

Is there really anything objective in this world of ours?

Making dollars and sense of philosophy (Explain Yourself)

Let’s take a little diversion here, away from safety for a second.

Think about money.  If you have $20 in your wallet, I think your friend would agree that it’s worth $20. And it’s worth twice as much as the $10 in their pocket.

That’s sounding quite objective right? Money is so well known and pervasive in our world and pretty black and white, right?

And then the market crashes.  And your currency dives.  $20 won’t even buy you a loaf of bread.

Money was created not for any of us but as a way for kings and queens to feed their troops when they were in foreign lands.  And then it became a way of levying taxes on people instead of taking a certain amount of their grain or chickens or rolls of cloth.

It’s all made up.  Nothing to do with money is an objective reality which we all experience the same way.  Like the Cree Indian saying apparently goes “Only when the last tree is cut down, the last fish caught and the last stream poisoned, will we realise we can’t eat money”.

Is money something that exists as a single objective reality?

When we think about it, almost everything around us represents a social reality that is constructed, sometimes shared, but almost never universal or objectively true.

Philosophy as a foundation of professional practice

What I learned after many years of having rejected philosophy is that I had a pretty flimsy way of making claims about the work I did and the impact that it had.

Philosophy itself isn’t about having the answers, but asking better questions.  It helps us have strong views but hold them loosely, as we inquire and challenge and test them.

This is starting to sound quite rigorous right? Quite scientific?

I practiced health and safety in a way which was taught to me and the way the law suggested without ever understanding the philosophy behind any of it, or the world more generally.

I would argue that much of risk and safety is based in a positivist worldview, the single objective world hypothesis, for which there is ample evidence to be able to challenge.

You know how heaps of people are talking more and more about complexity? That’s one way of saying ‘hmmm, there isn’t much about this objective world we thought existed, that’s objective anymore’.

By now, if you’re like me, you’re probably feeling pretty uncomfortable.  Maybe even defensive.  I would mutter things to myself like “well that’s nice, but how in the heck am I meant to practice health and safety with all the systems and controls and processes and laws that assume a single objective reality, if that’s not the case?”

It seems overwhelming, if not impossible.

One persons motivating work situation is another persons stressor.

That asking for suggestions only works when an individual feels like their suggestion will be valued.

When we get multiple people together, that group of perspectives creates learning more than something being prescribed to them. And that group will come up with workable next steps to create a safer, and somewhat more shared reality for them.

Decisions about acceptable risk are done by socially mediated consensus.  And they are totally inconsistent because different people have different realities.

We use social proof and offer people new knowledge that can influence a change in their reality – which changes their priorities, their attention, and their safety.

The End (Or the beginning?)

My earlier rejection of philosophy taught me how important philosophy actually is to a conscious way of living and a competent approach to professional practice.

I might be wrong, but one thing philosophy does teach us, is that it’s worth getting curious about.  I certainly have become a better professional because of it.

Thanks so much for listening.  Until next time, what’s the one thing you’ll do to take positive, effective or rewarding action, to grow yourself, and drastically improve health and safety along the way? Seeya!