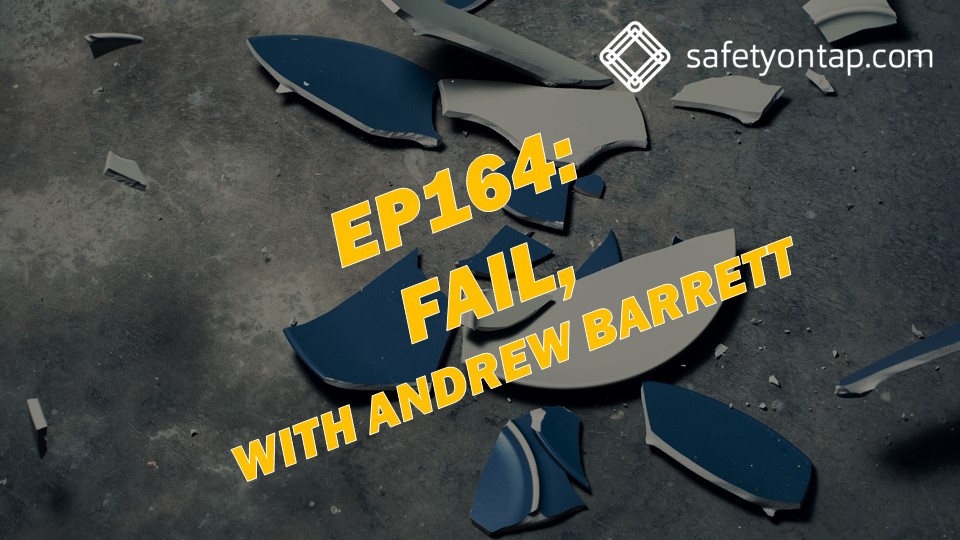 In 1853, two things happened.  First, a sickening but stubborn number of people died in big cities around the world when the elevator they were travelling in crashed to the lowest floor, after the rope that pulls it up and down broke.  And, in 1853 in Crystal Palace, New York, more than a million people attended the Exhibition of the Industry of All Nations, A kind of World Fair.  In front of a massive crowd there, Elisha Otis got into one of the elevators his company manufactured.  They hoisted the elevator by rope to the top of a large, glass shaft, and he instructed his men to cut the rope holding the elevator.  Which they did.

Since you’re listening in, you must be a leader wanting to grow yourself and drastically improve health and safety along the way.  Welcome to you, you’re in the right place.  If this is your first time listening in, thanks for joining us and well done for trying something different to improve! And of course, welcome back to all of you wonderful regular listeners.

Elisha Otis made an impact that day.  He succeeded.  He got what he planned.  As soon as those men cut the elevator rope, it dropped momentarily.  The crowd holding their breath as they thought they were about to witness a man die in front of their very eyes.  And then this happened.

“A model of engineering simplicity, the safety device consisted of a used wagon spring that was attached to both the top of the hoist platform and the overhead lifting cable” Time magazine quotes one of the original reports of the spectacle.  “under ordinary circumstances, the spring was kept in place by the pull of the platform’s weight on the lifting cable. If the cable broke, however, this pressure was suddenly released, causing the big spring to snap open in a jaw-like motion. When this occurred, both ends of the spring would engage the saw-toothed ratchet-bar beams that Otis had installed on either side of the elevator shaft, thereby bringing the falling hoist platform to a complete stop” .

Elisha Otis made a gob-smacking impact on that audience at Crystal Palace…actually not just that audience, an entire industry of building designers and developers, and every single unwitting member of the public who uses an elevator today.  Literally this man and his invention saved thousands of lives and countless millions of dollars, and arguably opened up the innovations required to engineer higher and higher buildings – which were not difficult to build, but were hampered by either dangerous elevators or an impossibly long stair climb.

It’s phenomenal to think how much impact this man and his invention made.

As you can imagine, Otis had no problem selling braked elevators after that, and it’s no surprise that the company is among one of the rare ones of that era that are still around today.  They absolutely overtook the market.

Let’s play Facebook meme bingo – I’ll say the quote, and you check off in your head whether you’ve seen or heard it before, ok? Here we go.

“I’ve missed more than 9000 shots in my career. I’ve lost almost 300 games. 26 times, I’ve been trusted to take the game winning shot and missed. I’ve failed over and over and over again in my life. And that is why I succeed.” Michael Jordan.

“No plan survives first contact with the enemy” That’s an extra hard one, attributed to Prussian military commander Helmuth von Moltke, and it’s a very simplified and Anglicised version too.

What do these things all allude to about Otis’ success during his spectacular demonstration at Crystal Palace in 1853?

99.9% of his work was done before that day.  He and his company were engineers and inventors.  They spent most of their time exploring, trying new things, testing hypothesis about this product or that mechanical idea, and ultimately failing again and again and again.

I know most of you aren’t making elevators.  Or possibly even designing safety critical systems, since that’s usually a very specialist job.

But every day, you create things, design things, ask people to do certain things, and you check that this thing or that thing is being done – all in the name of safety.

Does this sound familiar?

I’m about to make some deliberate generalisations now and you and I.  So listen to these carefully, and like the meme bingo, just be honest with yourself about whether what I say fits you, or whether you are the exception.

First, most of us work on the basis that we will be as right as we possibly can be, based on whatever combination of experience and knowledge, we have at the time, even if that’s a few people putting their heads together.  We develop plans, and deploy our resources, to design and communicate and implement and check this thing or that thing assuming that it’s our best chance of getting the outcome we want.  It’s kind of a best chance fixed odds.

Second, most of us take an all-in strategy.  Even if you’ve never played roulette before, you’ve probably seen it in a movie, where players put their chips on certain numbers, groups of numbers, or colours, hoping the ball flicked into the spinning roulette wheel falls in their favour.  Multiple bets offset the risk that we loose any one bet.  Instead of that, most of us design and implement single pronged strategies – we have no plan B, no alternate strategy with which we can compare results.

Third, most of us, much of the time, have no idea what we are actually trying to achieve – what outcome we are seeking.  Are we seeking to learn? To try something new? To create? To understand? To influence behaviour? To enrol people in a change? Otis was really clear what he wanted – no falling elevators.  And hundreds of iterations and failures and scrunched up bits of paper later, his solution emerged.

Fourth, most of us rarely circle back after we’ve done something, that we hope will make some kind of change, and genuinely ask the question, did that turn out how we wanted? How we expected? How we hoped?

Let me bring this together for you.

Back to Einstein.  He encourages us to think about proportionately how much time we think about what’s in front of us, before rushing to action.  Try and really understand the problem.

Von Moltke taught us not to expect that out plans will do what we expect them to do.  Because they rarely do.  The logical extension of this is to make your plans flexible, and have more than one option available.

But in war you only get one chance at an encounter with the enemy, which is not the same for us.  Every day we get the chance to explore not one, but multiple hypotheses about how we think this plan or that will achieve a certain outcome.

And finally, MJ.  He missed 9000 shots.  And yet he is arguably the most successful and famous basketballer of all time.  You need to miss more shots, because you need to take more shots.  Two, three, five kinds of ways to test a hypothesis, are not out of the question for most of us.

So get clear on your hypotheses.  Come up with a few options.  Experiment with them, and embrace the learning which will come from failure in the form of feedback.

And like Otis, your success will come not from a spectacular event in front of a crowd of onlookers cheering.  Your success will come from the tiny little failures of every day work experiments that you were courageous enough to create, to learn from, and improve from.

Here at Safety on Tap we’re starting a new learning teams implementation case study group soon, and I’m looking for five people to join.  If you have been thinking about getting learning teams started in your company, then we will make that happen if you are ready to start.  It’s called learning teams implementation, because that’s what we do – not theory, no classroom – every week over 10 weeks we enable you to implement the necessary pieces to have a successful learning team.  And it’s called a Case Study Group, because you do this with a group of people from a range of companies, all on the same journey, and instead of us using some irrelevant and far away case study examples, we simply enable you to become your own case study – guaranteed to implement learning teams.

We created this as our own experiment – I wondered can we enable a big group of diverse people from lots of organisations to implement learning teams in the middle of Covid? The answer is yes! We have awesome success doing this with health and safety people and operations people alike – one group member talked about how we helped them make learning teams take off ‘like a wildfire’.

If you want to know if this might fit into your plans as an experiment for the coming year, answer the questions below and I’ll get in touch.

Thanks so much for listening.  Until next time, what’s the one thing you’ll do to take positive, effective or rewarding action, to grow yourself, and drastically improve health and safety along the way? Seeya!